“Ode to Jay” by Roger Jenkins 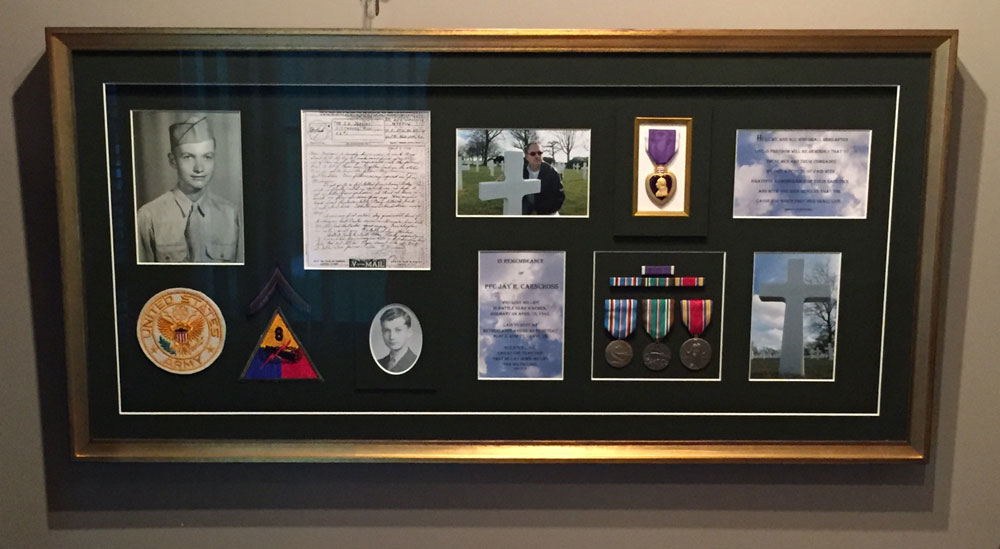 I remember being very young and hearing how my middle name “Jay” was chosen for me. My father and his cousin Jay spent much of their childhood playing and swimming together, spending a lot of time at Grandpa and Grandma’s farm throughout the Depression years.  Dad was a couple years older than Jay.  Years later when war broke out, Dad quickly found himself in the sky over Europe as a B-17 Co-pilot.  A few missions later, he was shot down, critically injured and imprisoned. We think this is one of the reasons why Jay joined the Army.

On April 7th, 1945, Jay had just written a letter to his grandfather, saying he’d seen his first action and he was with a bunch of good fellows.  Three days later, on April 10th, he was killed in action.  After being liberated from prison camp and returning home to a military hospital to recuperate, Dad finally learned of Jay’s death. In remembrance of Jay, I was given my middle name.

A few years ago, I gathered together some pictures and a copy of the letter that Jay wrote to his Grandpa and dropped them off PJ’s Frame-Up. Cindy put together a beautiful display in Jay’s honor.      I also had an M1 Garand built to hang above the display.

But the project didn’t end there.  A few years later, my work would take me near the cemetery in the Netherlands where Jay was laid to rest. It was always a dream to someday visit his gravesite and lay my hands on the cross that marked it.  So now, with pictures of that moment and after purchasing the medals that Jay would have received, the display had to be redone.  A Purple Heart, engraved on the back with “PFC Jay R. Carncross” was also added.  Jay is now remembered and honored each day as I walk into my den and view the display.

I thank Cindy at PJ’s for helping to keep Jay’s memory alive.  He will be forever honored and remembered for his sacrifice.

“Never was so much owed by so many to so few” is a quote from a a wartime speech made by British Prime Minister Winston Churchill.